Continuing down the road of testing out what my man-dollies can do in the new edition of 40k is an ongoing process at the moment.

Last night I met up with one of my besties for some scientific dice rolling at our FLGS so that he could further test out Ork units & I decided to pull my long suffering Deathwatch out from the back of the hobby cupboard.

I managed to play a few games with Death watch in 7th & have always found it hard not to go down the “Pimp my Killteam” style of list building. I mean they struggle to put numbers on the board anyway but who in their right mind can resist all the sweet gear? *cough*FRAG CANNON*cough* With that in mind I thought why change the habit of a lifetime, or at least one edition of 40k?

So this is what I went with….

As you can see lots of upgrades on the Killteams & two Land Raider variants eat a lot of points in this edition but lets take a look at the Killteam as a unit entry.

The Killteam is now the mainstay of the Deathwatch force as your only troops choice, standard Veterans are no longer an option outside this unit entry but it doesn’t matter as your Killteam can comprise entirely of Veterans should you desire.

The basic unit is five Vets including a sergeant and as before a Killteam can contain no more than ten models in the unit. You can add options into the unit & each different option adds a special rule to the Killteam & none of them are to be sniffed at:

Unit composition aside the key to survive-ability for this unit seems to be in the mix of gear you bring along, I seriously recommend a couple of Storm Shields per Killteam to tank serious weapon hits, it helped my units survive some serious Loota barrage! I’m not going to go into detail on the Frag Cannon, it does what it always did, deletes stuff. They’re not cheap by any means & adding four to a unit will seriously up the cost but they can really bring home the bacon.

The Bikers were an odd choice in this list I grant you being run at absolute minimum unit size but it allowed me to go to town on the upgrades & I was initially very tempted to try out the get of jail free card that is the Deathwatch teleport homer.

The Deathwatch teleport homer is an interesting piece of kit, you can deploy one for each unit that carries it during deployment inside your deployment zone. Then later in the game any unit containing at least one Deathwatch Terminator can forego movement & at the end of the movement phase be removed from the board & placed within six inches of the homer. This sounds great but the downside to them is that if an enemy unit comes within nine inches they’re removed & that seems to happen very easily. It’s cool, but I wouldn’t base you’re entire game plan on it.

Lastly a dual entry on this unit review Captains & Land Raiders, both utterly solid choices in my opinion, you won’t go far wrong with either 🙂

Anyway here’s the Ork list I was testing against….

Game ended 8:4 to the Orks with only the Big Mek left alive at the end of turn 5 (curse you random game length!). Numbers were definitely the key here as the Orks were able to get a big lead fast forcing me to try & table him. Deathwatch could struggle in Maelstrom missions due to low numbers but I’m sure not going mental with the upgrades could yield a few more bodies.

Here’s a couple of quick snaps… 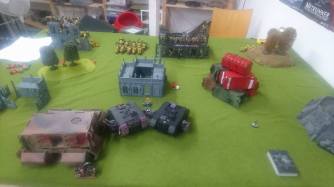 One thought on “The great 8th edition unit test…Deathwatch”

Reflections from the Mirrored City and beyond

Can You Roll A Crit?

Hidden between the Trees there is a Base in the Forest. We paint miniatures and talk about colours. Have a look around :)